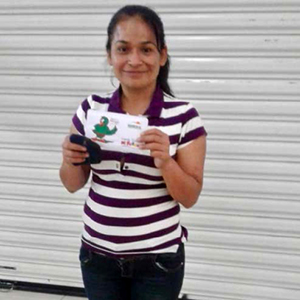 Gracia is proud to share with you that as of July 3, 2019, Josselin Carolina opened up her own savings account. Josselin has been working in the Milagros Workroom for the last two years. Her jobs include keeping the Workroom in order and helping production to run smoothly. She has come a long way since being found in the local market in Jalapa. During her first few years at Casa Hogar, Josselin Carolina spoke very little and didn’t interact with others in a meaningful way. Since beginning her work with Milagros, everyone has seen her move from being closed off to others to becoming a fully integrated member of the Milagros Workroom. Las Mujeres Fuertes of the Workroom have helped her become a responsible, dependable worker. Josselin lives with young women who are professional; she sees them earning and saving; and after spending time in their presence, she sees herself as a capable young woman.

MIT’s Poverty Action Lab posits that when girls are exposed to successful women, their aspirations change; they aim higher, try harder, and commit to achieving. This theory is clearly realized by Josselin Carolina.

In observing Las Mujeres Fuertes learn to save and budget their own money, the idea of starting a savings account was planted in Josselin’s mind. Recently, she voiced that she wanted control over her money. Gracia is proud of Josselin Carolina, who now has her own savings account. Her monthly salary will be deposited into this account. She will begin to save her money. And at last, Josselin will be able to buy her own shampoo, just like the other girls.

Click here on IMPACT to see what we’ve been up to! And let us know what you think!