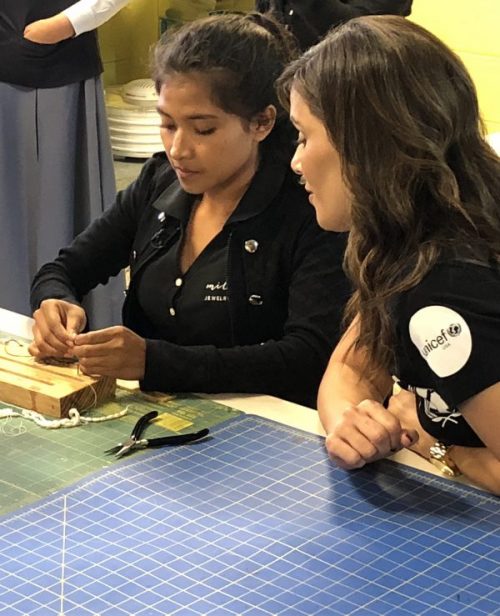 Ilma demonstrating a Molly bracelet to the UNICEF crew

On Monday, October 8, 2018, Las Mujeres Fuertes of the Milagros Workroom were honored to host teams from UNICEF. The organization had contacted National Geographic’s NOVICA to see if they were aware of any groups in Guatemala who shared UNICEF’s mission. Diego Chacon, NOVICA Director and friend of Gracia, knew immediately that Milagros would be the perfect match! Both organizations partner to bring artisan products to the broader market through their catalogue sales.

Teams from both UNICEF GUATEMALA and USA came to the Milagros Workroom with a PR director and a small production crew to work on promotional material. The UNICEF team took photos and video of Las Mujeres introducing themselves and explaining their roles in the Workroom. Ilma was also featured demonstrating how to make a Molly bracelet. UNICEF’s plans are to feature and promote our work along with Milagros products on their website. With the holidays around the corner, the timing couldn’t be better!

Diego’s last trip to the Workroom was in 2016, and he made a point of telling us how impressed he was with Milagros’ growth over the last two years. Thanks, Diego! We are grateful to all of Team NOVICA for their enduring support for our work.

Milagros distribution is expanding to UNICEF thanks to its partnership with NOVICA. Our program is growing, jobs are being created, and lives are changing.